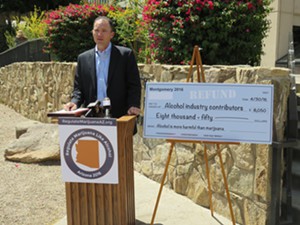 The campaign released Montgomery’s February 1 campaign-finance report to New Times, which shows that he took the contributions from Andy McCain, Robert Delgado, and Douglas Yonko of Hensley, and James Moffett Jr. of Crescent Crown.

No big surprise here, at least not for those in-the-know in Scottsdale politics. Mayor (and incumbent candidate) Jim Lane has also benefited mightily from liquor industry contributions for years, as have Virginia Korte and Suzanne Klapp. Read more:

Check out this article from azcentral: