As a pilot, I’m familiar with the small (15%) difference between a “statute” mile (the common use) and a “nautical” mile (used for marine navigation–obviously–but also aerial navigation). Pilots almost always talk in nautical miles, and in nautical miles per hour (aka “knots”).

At the Scottsdale mayoral debate last week, I heard one of the attendees mention that during a recent meeting of the Scottsdale Citizens Bond Oversight Committee, a serious debate arose regarding the meaning of “mile” in Scottsdale.

The Bond Oversight Committee was formed after Mayor Lane and the city council majority put on the November 2015 ballot a package of bond items, which Lane and the others misrepresented as addressing “critical” city infrastructure needs, and the citizens approved about $100 million worth. One of the sub-items was $12.5 million for fixing potholes.

You can read elsewhere on ScottsdaleCitizen my opinions regarding the dishonesty of this misrepresentation, and the mayor’s malfeasance in not keeping with infrastructure maintenance via general fund transfers per the city’s enumerated “financial policies” and common sense. And mind you, when the politicians say “bond,” what they really mean is “borrow.” Bonds are debt paper, for which you–the taxpayer–have unwittingly pledged the value of your home and future tax revenues.

For purpose of this article, I’m only going to focus on the pothole bond the voters approved. Here’s what was actually on the ballot with which you voted:

Shall the City of Scottsdale be authorized to issue and sell not exceeding $12,500,000 principal amount of its bonds to provide funds to plan, design, construct, replace, and improve the following street project: Citywide Deteriorated Pavement Replacement?

Payment of Bonds: The issuance of these bonds will result in a property tax increase sufficient to pay annual debt service on the bonds.

Even the Arizona Republic published the 140 mile number.

Now, city public works department staffers are saying that the 140 mile number does not refer to “centerline miles.” It refers to “lane miles.” So if, for example, the roadway in question is four lanes, we’ll only get 35 miles “repaired and repaved.” I’m guessing Scottsdale’s average roadway width is around three lanes, so 47 miles or so will be renewed.

Interestingly, from the minutes of the Citizens Bond Oversight Committee, it appears that a majority of committee members want to officially bring this discrepancy to the attention of the city council, regardless of foot-dragging by public works department staff. Only retired city employees Judy Frost and Alex McLaren voted not to do so. Remember, Judy Frost also served as vice-chair of the Scottsdale Bond Task Force that vetted projects for the ballot. 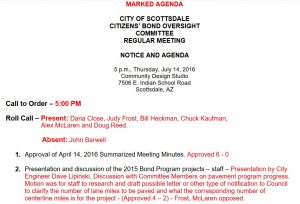 I’m guessing it won’t be long before the other members to get phone calls telling them to sit down, shut up, or get removed. Think it won’t happen? It has happened before!