Incumbent city council candidate Virginia Korte just retweeted an AZCentral tweet announcing that the taxpayer-subsidized office building known as SkyThong will soon include a Starwood Hotel. This is because of yet-another city lease amendment favorable to Sharon Harper’s Plaza Cos., thanks to Korte and her council cronies. 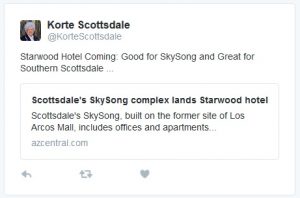 What you may not know is that the W Hotels and Resorts are one of Starwood’s brands. As in, Shawn Yari’s W Hotel which anchored the metastasis of the Scottsdale’s Barf District.

After we “struggled with that success” (to paraphrase incumbent mayoral candidate Jim Lane) for some time, Lane led his council cronies in crafting a virtually unenforceable noise ordinance, designed only to appease neighboring historic single-family areas.

Even fake mayoral candidate Bill Crawford lodged complaints about noise from the W’s roof-top pool parties, and as I recall the manager was arrested for not turning down the volume. But of course, some fancy mouthpiece easily defeated Timmy Lasota’s ordinance (he was Lane’s chief of staff, and thought he was going to be appointed city attorney).

And Lane also gave us a new public urination ordinance, as well as at least one revision.

Is this what we can expect from the new Starwood property at SkyThong? So much for the resurgence of the McDowell Corridor!