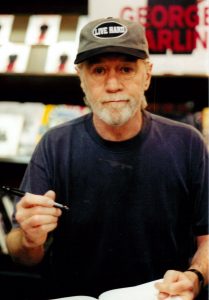 “Scottsdale Journalism?” Is that even still a thing?

Did you know that Carlin was a US Air Force veteran? He was also court-martialed three times. The USAF apparently doesn’t have a sense of humor.

Did you know that a Florida Marlins minor league baseball team is named “The Jacksonville Jumbo Shrimp?” Now THAT’S funny!

Mike’s panel discussion was mostly a reunion for some folks who used to work for Jonathan Marshall’s now-defunct Scottsdale Progress newspaper.

On a small tangent, Marshall bought the Scottsdale Progress in 1963, and sold it in 1987 after 24 years, to free himself up for an unsuccessful US Senate campaign against Barry Goldwater.

The Progress ultimately became part of the East Valley Tribune, which itself went bankrupt in 2009. Ironically, the Trib’s Paul Giblin and Ryan Gabrielson were awarded a Pulitzer that same year for reporting on how now-disgraced former Maricopa County Sheriff Joe Arpaio neglected law enforcement duties to pursue his anti-illegal immigrant efforts.

Jonathan Marshall died in 2008. Ryan Gabrielson said in an EVT article about Marshall’s life, that Marshall,

Gabrielson’s article also mentions that Marshall published his autobiography, Dateline History: The Life of Journalist Jonathan Marshall, the month before his death. I’m sorry to say that the Scottsdale Public Library doesn’t seem to have a copy, but I’ve asked if they can get one.

So back to the topic at-hand:

Extra! Extra! Hear all about it!

Even before Scottsdale was a city, it had competing newspapers. They wrote the first draft of Scottsdale’s history, gave residents a voice and helped shape public debate.

Join us Wednesday, Oct. 25, as long-time Scottsdale journalists share their inside stories on covering the city, the state of journalism and look ahead to the future of the Fourth Estate.

Valerie Jones, who began reporting for the Scottsdale Progress in 1963 while still a Coronado High School student

Jerry McElfresh, who spent 22 years as a Progress editor and worked for the Mesa Tribune and Arizona Republic

Peter Corbett, [formerly] a reporter/editor with the Progress and Republic

Diane Enos, a former Progress reporter and attorney, who went on to serve as tribal president of the Salt River Pima-Maricopa Indian Community

Terrance Thornton was inexplicably a no-show, with Scottsdale Independent publisher Bret McKeand subbing. As I said earlier, I’ll get back to the Independent momentarily.

I do note with some interest, though, that McKeand is the only one of the panelists still working in the newspaper business. Also, while there were a few references to bloggers–which clearly are a wave of the future–Phillips didn’t invite any bloggers to be on the panel. That’s OK, because I get that this was mostly a retrospective discussion. But still…

I enjoyed the comments of all the panelists. And I enjoyed most of the questions from the audience, with the exception of the railings of everybody’s favorite gun-guy, Alan Korwin. Poor Alan was so bent on beating up the Washington Post, he didn’t seem to grasp that this was a primarily a discussion about LOCAL journalism. 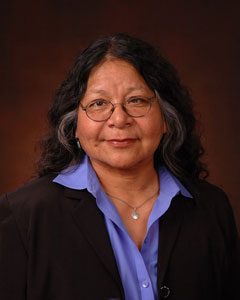 However, I was particularly interested to hear Diane Enos talking about her confusion over the conflicting information she has been seeing from both sides of the Desert Edge project that has been proposed (and is all but a done deal) for Scottsdale’s McDowell Sonoran Preserve. Enos is a smart lady, an attorney, and a former journalist. If SHE’S confused, you can imagine that more than a few Scottsdale residents are, too.

Enos’s comment especially caught my interest because none other than Sam Campana (former Scottsdale mayor, chief proponent of the Desert Edge) was in the audience!

Campana was schmoozing around with community historian and writer Joan Fudala, who is a little too pro-power-broker for my taste. Maybe since she holds herself out as a “historic consultant,” Joan will get some of the Desert Edge action from Campana? Joan has written some good books, but it’s tough for me to maintain respect for her…even though like me and George Carlin, she’s a USAF veteran. You see, I believe a historian–like a journalist–should walk a narrow path of neutrality.

I remember a few years ago watching with great disappointment as Arizona State Historian Marshall Trimble allowed himself to be trotted out to advocate before the Scottsdale City Council for Taber Anderson’s inappropriately high-density development called “Reata Ranch” (euphemistically labeled a “guest ranch”) in North Scottsdale adjacent to the Preserve, ironically. I lost a lot of respect for Trimble that day. I hope Joan doesn’t trod that same path.

I also note that panelist Peter Corbett wrote on Reata Ranch while he still worked for the Republic. 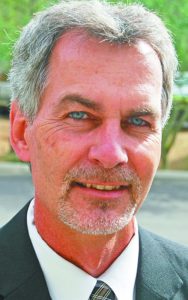 Now for the meat of my irritation with the evening: The Scottsdale Independent’s Bret McKeand gave a mini-sermon about journalism’s duty to facts, honesty, and the local community. Mike Phillips’s introduction of McKeand included references to McKeand having been a president of the Chamber of Commerce in Peoria. I was immediately reminded of the Scottsdale Republic’s former “publisher,” Michael Ryan.

Both Ryan and Zidich are good examples of news guys trying too hard to BE the news, rather than just reporting it. It’s looking to me like McKeand is a bird of the same feather.

In 2015, Terrance Thornton and I BOTH took issue with the Republic for accepting a lot of advertising business and city funding for events the Republic was promoting, while simultaneously ignoring some serious issues in the city.

However, last year I got into a tiff with Terrance Thornton, his boss McKeand, and HIS boss, Independent Newspapers’ president Ed Dulin, over their refusal to cover (or even print a letter to the editor about) a campaign story involving one of the mayor’s campaign supporters. You can read more about that via my original post.

Ultimately, I believe their abdication of journalistic duties mostly had to do with business contracts the Scottsdale Independent received to do commercial printing for Jason Rose (the mayor’s campaign PR manager), Barrett-Jackson, and the Scottsdale Charros baseball spring training programs, among other printing plums. It’s amazing how fast the critical commentary on City of Scottsdale politics dried up after that.

Come to think of it, I don’t believe I ever heard Bret (or any of last night’s other panelists, for that matter) even mention the words “integrity,” or “ethics.” So Bret’s sermon rings a bit hollow for me given my experience with the so-called Independent.