During a refreshing, unplanned visit to the Phoenix North Mountain Visitor Center, I saw on display this letter to the residents of the Sunnyslope area, sent to them upon annexation of the area into the City of Phoenix. 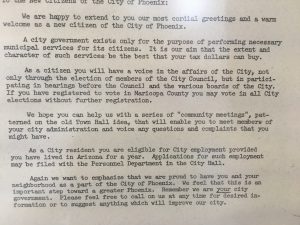 It says, in part,

A city government exists only for the purpose of performing necessary municipal services for its citizens. It is our aim that the extent and character of those services be the best that your tax dollars can buy.

Remember that we are your city government.

What a difference between the Phoenix city government of 1959 and the thugs of Scottsdale in 2019.