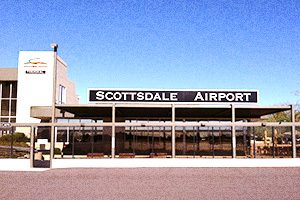 Officials say the project is estimated to cost $25 million and will be financed through city-issued bonds. Construction is set to begin next February.

Unbelievable. Which is to say, “Unbelievable anywhere but Scottsdale.”

The City of Scottsdale just BORROWED $12 million to fix potholes, and now we need a new airport terminal? Now we’ll add another $25 million to the highest per-capita debt of any city in the Valley (over a BILLION dollars total debt already).