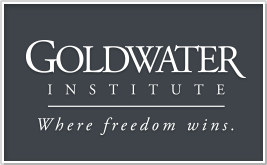 In 2015, for example, Scottsdale agreed to build $25 million hangars for Gemini Air Group, which is serving wealthy customers at Scottsdale Airpark. Gemini is paying back the construction cost via its lease, just as World View is scheduled to do with Pima County.

I ask you to look at Goldwater’s history and point me to a case–any case–they ever filed against a Republican.

Huckleberry actually makes an excellent point when he referenced the new $25 million hangers. I’d also like to take the opportunity to tell you (or remind you, if you already know) that the City of Scottsdale just floated bonds for (ie., BORROWED) $12.5 million to fix potholes, after a decade of short-funding infrastructure maintenance so they could SAY they have a balanced budget.

This is just the tip of the iceberg in Scottsdale. $15 million or so for the PGA to catch up on contractually-obligated maintenance at the TPC course, and $1.5 million for Phil Mickelson-leased McDowell Mountain golf course, for two egregious examples. Both of those sums were borrowed, mind you. And the CoS has the highest per capita debt of any city in the Valley (even more than financially-troubled Glendale) at over a BILLION dollars.

And then there’s the ongoing 20-year, no-bid city contract to the private business known as the Scottsdale Cultural Council, which also enjoys free rent and an ANNUAL $4 million taxpayer-funded cash subsidy.

I will however, take Huckleberry down a notch though for his citation of ARS 11-254.04. I don’t have it handy but I don’t think it includes any language that would allow any political subdivision of the state to be excused from proper procurement practices, like public bids.

Although Scottsdale certainly has sidestepped that aplenty. Everything I cited above should have been put out for bid. And regarding real property, the City of Scottsdale recently sold a large lot in Downtown Scottsdale to Scottsdale Healthcare (a private business now known as “Honor” Health) in a no-bid sale for 1/3 of its assessed value…and then promptly rezoned it to quadruple its value to the new owner!

What do all of these cases have in common? Goldwater’s absence.

I should also point out that Scottsdale’s so-called “Republican” mayor Jim Lane, is good friends with Doug Ducey, and the treasurer for Ducey’s 123 campaign. It probably won’t come as a surprise to you that Lane’s former chief of staff, JP Twist, now works for Ducey…nor that JP’s dad, Steve Twist is one of the founders of the Goldwater Institute, and was appointed by Lane to a key city task force.

The Cost of a Bad Hire