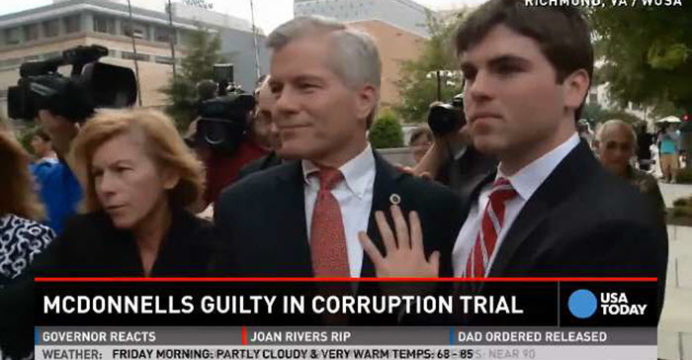 Although the McDonnells [former governor and first lady of Virginia] apparently feathered their nest by benefit of their public office, which obviously looks quite bad, none of these gifts appeared to run afoul of state law. The fact that all the received gifts were likely lawful under state law alone makes federal prosecution curious. After all, the citizens of Virginia are the ones most likely to be harmed through improper influencing of their public officials.

Unpersuaded that the citizens of Virginia know how to run their own state, the feds charged McDonnell with 11 counts of honest-services wire fraud and Hobbs Act violations. If the term honest-services fraud sounds familiar, then you might be thinking of Jeffery Skilling and Conrad Black, who won a couple cases at the Supreme Court a few years ago.

At issue in Skilling’s case was that the honest-services wire fraud statute was unconstitutionality vague. At issue was a very short statute that says “For the purposes of this chapter, the term “scheme or artifice to defraud” includes a scheme or artifice to deprive another of the intangible right of honest services.” If you’re asking yourself, “what does intangible right of honest services mean,” then congratulations! You’re as qualified as anyone in Congress to write federal criminal law, because no one can really say.