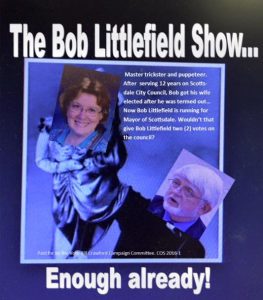 Every voter–and especially every woman–in Scottsdale should be patently offended by the suggestion that a wife is by definition a puppet of her husband, incapable of independent thought and subjugated by his manipulation. The conclusion I draw from this is that Bill believes no woman–at least no MARRIED woman–should be eligible for elected office.

Given Bill’s rabid support of the Trumpster (Googling “Donald Trump” and “misogyny” yields nearly a half-million hits, and endless citations of Trump’s anti-woman quotes), it doesn’t surprise me that Bill endorses this attitude. But it surprises me a little that he’d be so blatant about it.

I guess “equal rights” is a concept that doesn’t exist in the Crawford household, and he’d like to eliminate it from Scottsdale city government, too.