If there was ever any question about why Bill Crawford is running for Scottsdale mayor in 2016, a Facebook “share” by incumbent mayor Jim Lane of a Crawford post has removed almost all doubt.

While he was doodling misogynistic Photoshop art aimed at city council member Kathy Littlefield (who is married to mayoral candidate and three-term councilman Bob Littlefield), Crawford also drew up a rather complicated chart purporting to show a bunch of nefarious connections between Bob Littlefield and…

Me, for one. The rest are a list of community advocacy organizations from whom Crawford has previously sought endorsement (and me…but he waited until after I’d made my endorsements during the LAST election, then was mad at me for not jumping onboard his crazy train).

So it’s laughably ironic that in sharing Crawford’s ‘connections’ post (see below), Jim Lane actually revealed the most nefarious connection of all…between himself and Bill Crawford!

Many political pundits speculated that Lane campaign PR manager Jason Rose cut some sort of deal with Crawford, thinking that Crawford would take votes away from Littlefield. Polling seems to indicate that’s not the case, and Crawford takes more votes from Lane. So look for Crawford to “drop out” sometime between now and the deadline for nominating petitions to be submitted to the city.

Crawford’s campaign was always more about whining than winning. It was also about trying to make someone else–Littlefield–lose. The only question is whether Crawford is Lane’s lapdog, or whether the Lane campaign has just being playing Crawford for a fool. 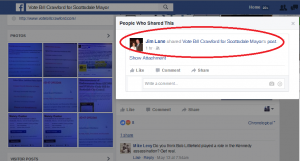