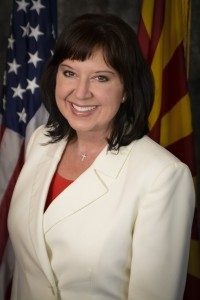 What is not fair game is to have a Treasurer [Jeff DeWit], who while moonlighting as a campaign operative, continues to throw wild accusations and have public meltdowns when one of his campaigns goes poorly. That’s just sour grapes.

Arizona Secretary of State Michelle Reagan is an idiot. She gave her critics plenty of opportunity to point that out with her failures in the two most recent elections to properly supervise her employees and vendors, thus opening up election results to question by the press and the public.

Most laughable (and ironic) of all is Michelle using the taxpayer-owned resources of her office (most notably, her official web page, text copied below) to criticize her political opponents, and by default support her political allies. If this had been published Tuesday, it would have been a clear-cut violation of the federal Hatch Act prohibition against using taxpayer resources for political purposes. And it may be anyway.

I write this on Thursday, following our Tuesday Special Election, and the outcome of Proposition 123 is still too close to call. The Yes votes are leading the No votes by about 7600. All our county election officials are still working hard verifying signatures on mail ballots that were dropped off at polling places as well as working with the handful of voters that voted a provisional ballot to make sure their votes are counted. I don’t believe the outcome of 123 is decided but already the No campaign’s excuses sound a lot like sour grapes.

The excuse the No campaign is using is that if only every Arizona household had received their publicity pamphlet on time then they’d be winning. Please realize that if the No campaign was up 7600 votes they’d have no concerns with the pamphlet, and then perhaps some of the Yes folks would be complaining about the pamphlet instead.

Here’s the reality of the pamphlet issue – the vendor in charge of developing the pamphlet mailing list failed in their job and we won’t be working with them again. This occurred on our watch and we are responsible. But we are also confident that Arizona voters had plenty of information about the two ballot propositions, including the publicity pamphlet, well in advance of when most voters actually marked their ballots.

The mailing list error did not affect any voter in Maricopa or Pima counties. Every household there got their pamphlet as scheduled. The reality of voting in Arizona is that these two counties make up about 80% of all votes cast.
The No team articulates their excuse for losing as a math problem.  Too bad their math is based on faulty assumptions.

The mailing list error affected Arizona’s 13 other counties evenly. In some of those counties the Yes side is winning and in others the No side is up. One cannot draw any correlation between when someone got a pamphlet and the outcome of the vote.

I have no doubt you’ve asked yourself, ‘What’s going wrong with Arizona’s elections?’  We all know about Maricopa County’s unacceptably long lines in March.  One of the major contributing factors to those long lines was the legal fact that registered independents were not allowed to vote in March. All of Arizona’s election officials spent several weeks publicizing this fact. Anyone remember a certain high profile elected official who went on national TV and urged independents to get in line and be sure to vote in the PPE? This is just a guess, but I think it’s fair to say that the number of voters who may have wanted to change their vote after they received their late publicity pamphlet is roughly equal to the number of independents that stood in line in March when they shouldn’t have because our Treasurer busied himself with appearances on CNN to spread election law falsehoods.

I think just about every Arizonan wants to see more money for our teachers and for education. Governor Ducey came forward with a plan, and Treasurer DeWit opposed that plan.  That’s politics, and that’s a fair game.  What is not fair game is to have a Treasurer, who while moonlighting as a campaign operative, continues to throw wild accusations and have public meltdowns when one of his campaigns goes poorly.  That’s just sour grapes.