Whenever Jason Rose tweets something particularly nasty, I always look at the time stamp and wonder if he’s three-deep into happy hour somewhere in Scottsdale’s Barf District, because no self-respecting PR hack would tarnish his own image and the image of his clients like that. But what would you expect from someone who made fun of the Special Olympics?

Jason sent one out yesterday in which he compared Bob Littlefield–the only combat veteran to serve on the Scottsdale city council in recent history–to the infamous information minister for Saddam Hussein. 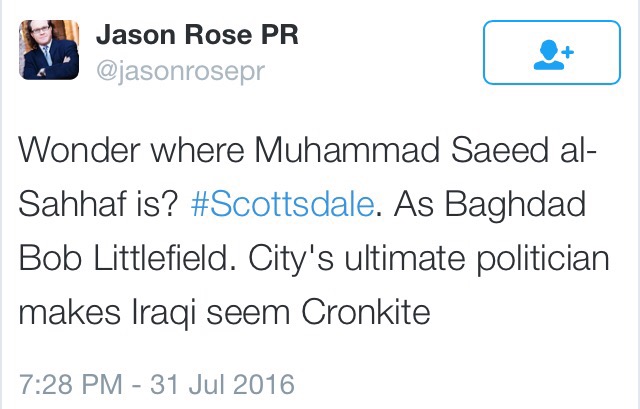 Ironic, considering how much Jason’s boss (and Littlefield’s cowardly opponent), incumbent mayor Jim Lane, acts like a dictator, and how Jason loves to spew ridiculous hyperbole. I should add that Jason is rewarded handsomely for his services. He has also gotten hundreds of thousands of dollars in taxpayer-funded subsidies for his rugby and polo matches, courtesy of Boss Lane and Lane’s city council cronies. Contrast that against the $18,000 per year that Littlefield earned as a city council member, probably about what he earned in Vietnam.

As a veteran, I’m highly offended by Jason’s attack on Littlefield, even though the depths of his offensiveness shouldn’t surprise me anymore. If Lane had any honor, he’d tell Jason to put a sock in it. Then again, maybe the tail is wagging the dog.