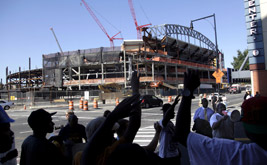 As University of Chicago economist Allen Sanderson memorably put it, “If you want to inject money into the local economy, it would be better to drop it from a helicopter than invest it in a new ballpark.”

Studies demonstrating pro sports stadiums’ slight economic impact go back to 1984, the year Lake Forest College economist Robert Baade examined thirty cities that had recently constructed new facilities. His finding: in twenty-seven of them, there had been no measurable economic impact; in the other three, economic activity appeared to have decreased.

Dozens of economists have replicated Baade’s findings, and revealed similar results for what the sports industry calls “mega-events”: Olympics, Super Bowls, and the like. (In one study of six Super Bowls, University of South Florida economist Phil Porter found “no measurable impact on spending,” which he attributed to the “crowding out” effect of non-football tourists steering clear of town during game week.)

Please click through to read Neil Mauser’s article in its entirety.

One factor that Neil didn’t include is massive campaign contributions. In Scottsdale, Mayor Jim Lane has gotten contributions from folks like the PGA (taxpayer-subsidized lease on the taxpayer-owned TPC course); Phil Mickelson (ditto for McDowell Mountain Golf); Craig Jackson (whose Barrett-Jackson auction got a huge, taxpayer-funded, auction-specific remodel of Westworld); and the Scottsdale Cultural Council officers and board members (SCC gets free rent PLUS an ANNUAL $4 million taxpayer-funded cash subsidy).

Source: Why Do Mayors Love Sports Stadiums? | The Nation

A Ticket to Ride or a Ticket to Nowhere? (exploring the myths of light rail systems)