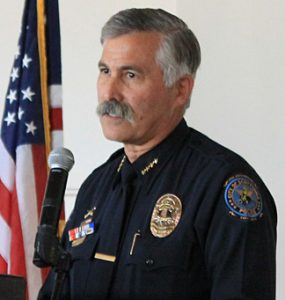 Scottsdale Police Chief Alan Rodbell seemed blindsided by the revelation that [former City of Mesa police lieutenant Rick] Van Galder [who had been convicted in Gilbert of super-extreme DUI and sentenced to three days in jail] was allowed out of his [Scottsdale] cell, had food delivered and his wife visit, and was even given a key card with access to the whole building.

“Our knee-jerk reaction was there was no way this could be true,” Rodbell said initially.

But surveillance footage showed it was true. Rodbell was adamant that those responsible for organizing and executing this plan would be held accountable.

“I’m going to take action that’s appropriate for the violations that have occurred,” said Rodbell.

Kudos to Wendy Halloran for continuing to pursue this story. I have grave concern that this is one of many less-than-stellar incidents involving the Scottsdale Police Department; incidents which when woven together make for a disturbing pattern.

From my experience, the rank-and-file officers are upstanding individuals, but the force suffers from lack of effective policies, poor training, and weak discipline.

Together, those add up to absence of leadership. Which points right to the top, at Police Chief (and director of Scottsdale’s Department of Public Safety) Alan Rodbell.

Over the years that I’ve been involved with city government and citizen advocacy, SPD has been plagued by one bad headline after another.

Here are a few just off the top of my head:

So to whom does Chief Alan Rodbell answer? Theoretically, the Scottsdale City Manager, a “charter officer” serving at the pleasure of Scottsdale’s mayor and city council.

However, for far too long, that office has been a revolving door, and for many recent months it has been filled by the temporarily-assigned head of the water department.

So this is really a reflection of poor leadership right from the top: Scottsdale’s embattled incumbent mayor, Jim Lane, and his council majority.

Lane was the subject of an ethics complaint filed by yours truly back in 2012, for berating the same Chief Alan Rodbell because of excessive overtime pay which I believe was generated by the Jim Lane-championed Barf District in Downtown Scottsdale.

The judge who reviewed my complaint agreed that Lane committed a violation, however, City Attorney Bruce Washburn dismissed the complaint anyway. I should point out that Washburn serves at the pleasure of Lane and the council majority, and therefore had a conflict of interest in even considering the complaint.

Afterward, however, Rodbell apparently decided to toe-the-line, and was rewarded with the plum title of Director of Public Safety, putting him in charge of the Scottsdale Fire Department, as well.