What a shocker, another multi-millionaire, professional sports team welfare recipient, and developer has endorsed the Mayor of Handout City. 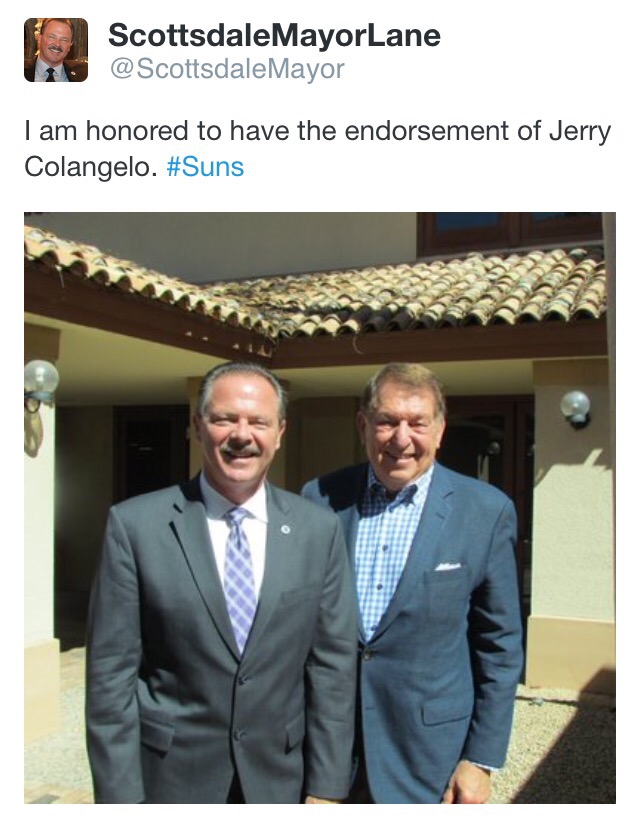 Jim Lane has championed millions of dollars in taxpayer-funded subsidies to the PGA, Phil Michelson, the NFL, and hundreds of thousands to his own campaign PR hack, Jason Rose, to promote Rose’s polo matches.

I don’t off the top of my head recall any Scottsdale taxpayer-funded subsidies to Colangelo’s Phoenix Suns or Arizona Diamondbacks. But I ask you: Do you think Colangelo supports Lane because the mayor is known for being a good steward of the public treasury?

Ditto Michael Bidwell (Cardinals), Bob Parsons (GoDaddy, developer), or any of the others on the long list of bar owners and housing project developers who appear on Lane’s campaign finance reports.
I also note that many of them don’t even live in Scottsdale. They don’t give a rat’s patoot about YOUR quality of life, because it doesn’t affect THEM.

Besides which, there have been a steady stream of rumors lately about the Diamondbacks and the Coyotes moving to Scottsdale’s side of Phoenix. Colangelo also lists on his resumé a history of involvement with the Coyotes that dates back to their move from Winnepeg.

So if you want a mayor who cares about the residents rather than viewing them as cash cows to be milked, vote for Bob Littlefield for mayor.

The more Arizona residents learn about Coyotes tax kickback plan, the more they hate it | Field of Schemes