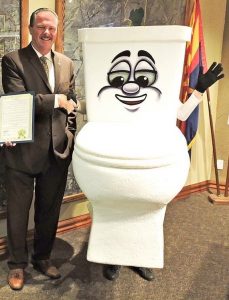 I can’t remember who sent me this photo, and I have no idea where it was taken. But I’ve been saving it for an appropriate moment. Given the way the Lane4Mayor campaign has been circling the drain lately, I figured now is as good a time as any to share a photo of Mayor Swirly.

I’ve gotten more 2016 campaign snail mail from Jim Lane than from any other candidate. He’s spending–and spending big–in the last weeks of the campaign, just like when he squeaked by with a 5% margin in 2012 against two virtually unknown opponents. That was truly an embarrassing electoral performance for an incumbent mayor.

But it looks like Lane is in even more trouble this time, given that in Bob Littlefield, Lane has a seasoned opponent with a firm track record of considering residents first and foremost when making city council decisions. 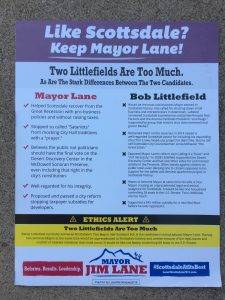 Jim brags that he “led the fight to stop” Satanists from giving the invocation at a city council meeting. What he doesn’t tell you is that the person who approved them in the first place was…Jim Lane.

Jim asserts that on his watch, “Neighborhoods in downtown Scottsdale all the way to the Tempe border have become the hottest in the Valley.” He does NOT mention that in this area of town (where he and his cronies have approved the largest number of high-density housing projects, and the greatest concentration of bars in the whole state), residents’ property values have significantly lagged the recovery in the rest of Scottsdale.

Lane claims he supports the residents’ right to vote on commercial development in the billion-dollar, taxpayer purchased McDowell Sonoran Preserve. Yet he only came to that position a few months ago, when it was clear that the public disagreed. Lane persists in the absolutely false assertion that the City Charter doesn’t already grant the citizens that voting oversight.

And Lane continues his misogynistic “Ethics Alert” smear campaign against council member Kathy Littlefield, stating that if her husband Bob is elected as mayor there will be “legal issues and conflict of interest violations.”

Even though I could continue with a point-by-point rebuttal of Lane’s tired lies, I’m going to stop and focus on that last one. Because, there’s only one Scottsdale mayor in history against whom an ethics complaint has been confirmed. 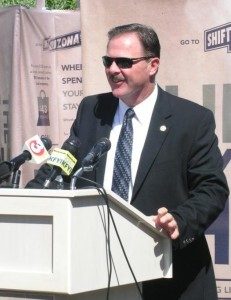 This ethics violation occurred in 2012, shortly after the aforementioned election. A newly-emboldened Lane and another council member publicly berated Scottsdale’s police chief about overtime spending which was due to dire public safety needs in the Lane-created Scottsdale Barf District.

Even though the judge that reviewed the complaint said that Lane’s actions were clearly in violation of Scottsdale’s ethics code, there was no remedy available in the code.

Jim Lane was SO concerned about ethics THEN, that not only did he do zip about this situation, he never even mentioned it again. He didn’t look into putting more teeth into the ethics code. He didn’t apologize for overstepping his authority. Nothing.

This is pretty typical for a guy who thinks the rules don’t apply to him, and that city policies are an obstacle to be overcome on the way to subsidizing campaign contributors rather than a guide to good governance.

Do you really want a known liar for your mayor?