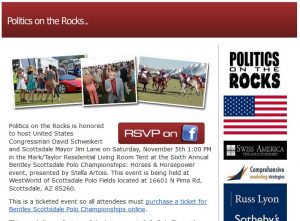 I got an invitation via email this afternoon to join Scottsdale’s embattled incumbent mayor Jim “Shady” Lane at the “Polo Party” at WestWorld next weekend.

Funny, there’s not a single mention in the invitation that you and I, the taxpayers of Scottsdale, chipped in to promote this “event.” Nor does it mention that the promoter is also Jim Lane’s campaign PR manager, Jason Rose. 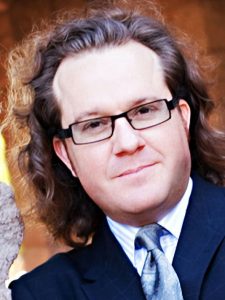 That’s right, Jim Lane spent hundreds of thousands of dollars of OUR money to promote Jason Rose’s polo party. This has been going on for years. And the invitation to Jason’s party has the gall to emphasize that WE have to BUY tickets if we expect to attend. I bet Lane didn’t buy one.

I surfed over to the polo party website and looked at the list of sponsors. You guessed it. “City of Scottsdale” isn’t on the list. The city logo does appear on one of the main pages, but it’s more of a rubber stamp than an explicit acknowledgement that you and I chipped in.

However, I DID notice on the sponsor list three organizations which ALSO receive taxpayer subsidies: The Scottsdale Cultural Council’s Museum of Contemporary Art, the Convention and Visitors Bureau (now “Experience Scottsdale”), and Scottsdale Fashion Square Mall. Of course, that means that even MORE of your money passed through these corporate skimmers on the way to the ponies.

And buried in the middle of the list is the Scottsdale Independent. I guess we won’t be expecting any criticism of taxpayer funding for this for-profit event, huh? So much for “Independent.”

I love horses, and cars, and I guess polo is OK. I would never agree with subsidizing it, but I probably wouldn’t squawk too much about spending a LITTLE taxpayer money on this kind of stuff, EXCEPT…

Lane and his council cronies just begged us to approve $100 million in new bonding (which means new taxes) to borrow money to fix city infrastructure. $12 million of that was to fix potholes!

Either Jim Lane doesn’t know his rump from a chukker, or he’s a crook. Or both.