OK, one last post for the day and then I have to get back to revenue-generating labor.

Many of us citizen-advocates and even a few folks on the Dark Side of Scottsdale politics have snickered at the stumbles of Jim “Shady” Lane’s floundering mayoral reelection campaign.

His original, almost-unreadable red, white, and blue signs were also pretty vague. Then he came out with his inane “Like Scottsdale?” 2-foot-by-8-foot signs in some awful brownish-purple color that I’ll just call “burple.” Like if you burped up Fanta grape soda and coffee.

I had speculated that Jason Rose must have been on vacation when some of these decisions were made. Turns out, he was actually out of the country for some of them, but I wonder also if the brain trust at Lane4Scottsdale (Mike Manson, and knuckle-dragger Ray Torres) hadn’t suddenly decided they were smarter than a guy who does this for a living.

Jason Rose clearly is no rocket surgeon, but he’s managed to do pretty well for himself in the PR business. So I can’t imagine he chose burple as an official Lane campaign color.

Then I see similar-sized, burple-color signs for embattled incumbent council member Suzanne Klapp sprouting up in the vicinity of Shady’s signs.

Now, I can connect the dots. This must be the work of Kyle “Cheesy” Moyer. Maybe Kyle is trying to weasel his way into Jason’s client list. Or he and Jason have formed some sort of unholy alliance. Or both.

And Klapp is trying to ride Lane’s coattails, since she’s severely trailing the other council candidates. She got off script a couple of times in the last four years, and she’s no longer the darling of the Chamber of Commerce.

I especially enjoy the irony of the sign location above, at what has been described as one of the signature street corners in Scottsdale…in front of a dirt lot, an electrical power distribution station, and–if you look closer–weeds and beer bottles. I probably don’t need to tell you that this is across from the Barf District on Camelback Road. 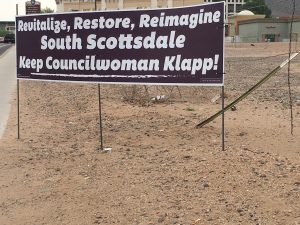 My civic duty is done for the day. Back to work!