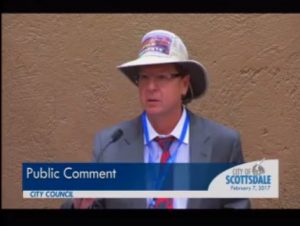 It was reported to me last night that at the direction of Scottsdale mayor Jim Lane, fellow resident advocate Mark Stuart was cut off during remarks to the city council about the proposed multi-million dollar “Desert Discovery Center,” during the “public comment” period of last night’s council meeting.

The live broadcast of the city council meeting was discontinued, and Lane had Mark arrested.
Mark was apparently injured at some point during the arrest, transport to, and/or detention in the Scottsdale city jail.

Council members Kathy Littlefield and Guy Phillips have not responded to my email requests for more information. A representative of the city attorney’s office has acknowledged my request for an unedited version of the meeting video, but I have not received it yet.

Obviously I am very concerned about the violation of the right of free speech and right to petition guaranteed by the First Amendment to the US Constitution, regardless of how irritating a citizen may be to city officials.

Many concerned citizens have stood at the Kiva podium over the years to express their displeasure with, AND support of various mayors and council members.

But this is a new low in the democratic governance of Scottsdale, and surely a bad omen of things-to-come during Jim Lane’s final term as mayor. Heaven help the whole state if he gets elected or appointed to a higher office.

You can email the city council at

Update: Mark was released from the Scottsdale city jail to the hospital where he was evaluated for minor injuries, and he’s free now.

The portion of the city council broadcast leading up to Lane having Mark escorted from the podium can be seen via post on the NoDDC Facebook page. Lane orders the broadcast terminated before Mark is escorted out of the Kiva.

I have submitted a public records request for the unedited video and will post it when I have prepared it.