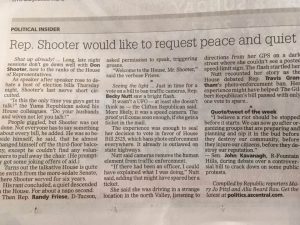 So, just so we’re clear. Rep Becky Nutt will be voting “Yes” to ban photo radar because she was just nabbed speeding. “She said she was driving in a strange location in the north valley, listening to directions from her GPS on a dark street where she couldn’t see the posted speed-limit sign”. Well, that does seem unfair. If being lost and confused and you can’t see well doesn’t slow you down so you don’t, I don’t know, run over a bicyclist, God forbid we get you to slow down with a camera. She adds, if she had a chance to speak with a police officer, she might have explained away the ticket. Well, Becky, as a life long blonde I’m gonna go out on a limb and state that I have a much better chance of talking my way out of a ticket than you do. Still doesn’t make it right. Or safe. The law is the law is the law. Slow the heck down if you don’t want a ticket.

So much to unpack today. I’ll leave you with this chilling Minority Report quote from our favorite, Sen Kavanagh, “I believe a riot should be stopped before it starts.” I was not aware of his omniscient powers- how can he tell which peaceful assembly will result in a riot versus another? Wow, these Republicans sure have special powers. Too bad they can’t use them to discern the effing speed limit.