In an article I posted last week (Bookshelf Intellectualism) about the utter failure of the Scottsdale Planning Commission to live up to it’s mission of serving the citizens of Scottsdale, I referenced a letter-to-the editor by political entrepreneur, Jim Bruner.

You may also remember that Bruner was a driving force in bringing taxpayer-funded professional baseball to Arizona, and in providing the Maricopa County Stadium District financing scheme that sweetened the pot for sports team mogul Jerry Colangelo and other investors.

We have seen a months-long ongoing drama play out in the local press as politicians jockey for a bigger piece of the baseball pie, which the Diamondbacks team ownership wants to keep all for themselves

The latest reminder of the dangers (to the taxpayers) of “public-private partnerships,” comes from Field of Schemes pundit Neil deMause. Neil describes how Diamondbacks ownership is trying to avoid covering the cost of deferred stadium maintenance, for which they have always been contractually obligated: Just give us our $187 million, okay? 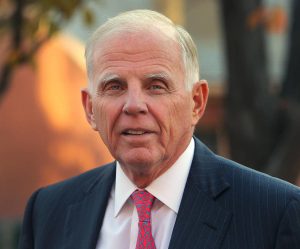 I note in particular Neil’s quotes from Diamondbacks lawyer-mouthpiece, Leo Beus. He’s partners with Paul Gilbert in a law firm which has represented a number of big developers in zoning cases around the state and in Scottsdale.

And by “zoning cases,” I mean eroded development standards and taller, denser housing projects that have plagued Scottsdale… with, I might add, the encouragement of our Planning Commission, and the development cheerleaders on the City Council, including mayor Jim Lane, and council members like Linda Milhaven and Virginia Korte.

Leo Beus has also been a driving force for ASU Foundation… the real estate development business, NOT the educational institution. As you may know, ASUF provided the umbrella under which Sharon Harper’s Plaza Cos. operate the taxpayer-subsidized SkySong office buildings. Yet another public-private partnership from which the “private” has profited at the expense of the “public.”