With this headline, “Bitters cocktail bar and restaurant to open at SkySong in Scottsdale,” we see what I believe is the bar district’s camel nose under the tent at the taxpayer-subsidized SkySong office park gulag.

And if bar district princess (and city councilwoman) Suzanne Klapp is tweeting about it, you can be sure that Klapp has already extracted a campaign contribution. 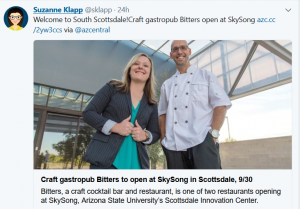 I note that with a byline of “Special to the Republic,” this is yet another example of press release journalism, crafted by a paid PR hack.

The featured “small plates” appear to be a variety of gourmet-sounding popcorn. To “soak up” $15 cocktails.

Is this what the taxpayers expected when we were told that we were in the hook for nearly $100 million in real estate costs, infrastructure, and ongoing subsidies to the private developer of SkySong…whose principals also contribute generously to the city council and mayor Jim Lane? I know I didn’t.

So, far from being the salvation of McDowell Road, SkySong is going to turn into a taxpayer-subsidized annex to the bar district…and a lot shorter commute for patrons from Tempe.