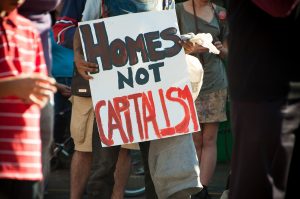 I was scanning stations while driving today and stumbled across the most recent, and timely (given the uproar created by my post yesterday regarding millennial whining about high cost of housing in Scottsdale) episode of Freakonomics.

The ultimate extreme of “affordable housing” is rent control. Maybe we should do THAT in Scottsdale?

There are decades’ worth of economic research describing the downsides of rent control. The first major paper was written in 1946 by Milton Friedman and George Stigler; here’s Milton FRIEDMAN:

“Rent control is a law that supposedly is passed to help the people who are in housing. And it does help those who are in current housing. But the effect of rent control is to create scarcity, and to make it difficult for other people to get housing.”

In addition to this well-produced piece about the longer-term hazards of this perhaps well-intentioned notion of disrupting the free market in the name of housing welfare, another thought occurs to me: I pondered in my post about whether the whiny millennials in question–who were in essence demanding that the city (or society at-large) provide them with “affordable” (whatever that means to them) housing near where they work–had ever considered getting a job in a city where their pay would be more commensurate with the housing cost.

One genius argued that he shouldn’t have to move to Gilbert in order to be able to afford housing on his Scottsdale job’s salary.

Now, I like Gilbert. I don’t know if he was bashing the town, or bashing the commute (which I wouldn’t like, either). But it seems to have never occurred to him that he might look for a JOB in Gilbert, maybe even one that pays BETTER than whatever job he has in Scottsdale that doesn’t pay him enough to also live in Scottsdale.

Upon reflection, that last point made me consider that this “affordable housing” concept is also a form of welfare for private businesses. It’s great for the bottom line if their workforce is stupid enough to take a job that won’t pay their bills. Sort of like a local version of the Walmart stories in the news a few years ago, wherein the employees couldn’t afford the cost of healthcare.

The Freakonomics article is a bit of a long read, but well worth it for anyone who is serious about understanding “affordable housing.”