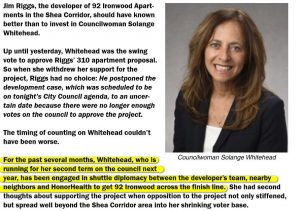 As referenced in Wikipedia, the term was first applied to Henry Kissinger’s Middle East peace efforts in the early 1970’s.

Wikipedia continues with this description of the concept:

Negotiators often use shuttle diplomacy when one or both of two principals refuses recognition of the other prior to mutually desired negotiation.

Herein lies the problem with the use of the term to describe Solange, and perhaps with her own perception of the nobility of her efforts: Solange IS a principal in this matter.

She’s not only an elected representative of the citizens, she’s also one of seven people who will vote to approve or disapprove this project, which represents a major departure from the organic law of Scottsdale.

“Shuttle diplomacy” is not, and should not be the job of a city council member. Their job is to determine whether a proposed project meets the criteria laid out in the General Plan and the zoning code, as well as the impact to the residents… the EXISTING residents.

Solange should let the developers do their own negotiating, and quit getting herself invested in these projects by advocating for them. Or get off the council and put in an application with the developer.

Who knows, maybe that’s been her plan all along?