Solange is a Liar

In addition to deluding herself into visions of being Scottsdale’s Henry Kissinger, running shuttle diplomacy between developers and the citizens for whom she’s supposed to be advocating, city council member Solange Whitehead is a liar.

I don’t use that term lightly, but she either knows or damned well ought to know that the information she’s frantically sending out begging for support for the 2035 General Plan is flat wrong. She’s over-invested in the ratification of a bad General Plan, and her panic is showing.

In a constituent email yesterday, Solange again repeats the most egregious lie of all:

Are There Consequences if Prop 463, General Plan 2035 Fails?  YES.  Scottsdale is required to update the General Plan and the process will start again at a cost to taxpayers. The next iteration may have fewer resident priorities such as higher standards for development.

This is false. The governing state statue never even MENTIONS the word “update.” In fact, the statutory requirement from ARS 9-461.06 is that the

K…On or before the tenth anniversary of the plan’s most recent adoption, the governing body of the municipality shall either readopt the existing plan for an additional term of up to ten years or shall adopt a new general plan as provided by this article. [emphasis added]

But the city council has NEVER given the citizens the option to readopt the existing plan!

Now, Solange didn’t invent this tactic of making it sound like the sky will fall on our heads if we don’t immediately ratify this mess the council has foisted upon us. But as smart as she thinks she is, she apparently couldn’t read (or just ignored) the next section of the statute, which explicitly states that a General Plan should not be enacted as an “emergency measure!”

And the section after that says,

M…If a majority of the qualified electors voting on the proposition fails to approve the new plan, the current plan remains in effect until a new plan is approved by the voters pursuant to this subsection.

The fact that the city has tried before to update the General Plan and failed is proof of the old adage,

As to the map that Solange says, “…will not affect future land uses…,” the version of the map that *I* see on page 60 (her reference) of the proposed General Plan, looks like this: 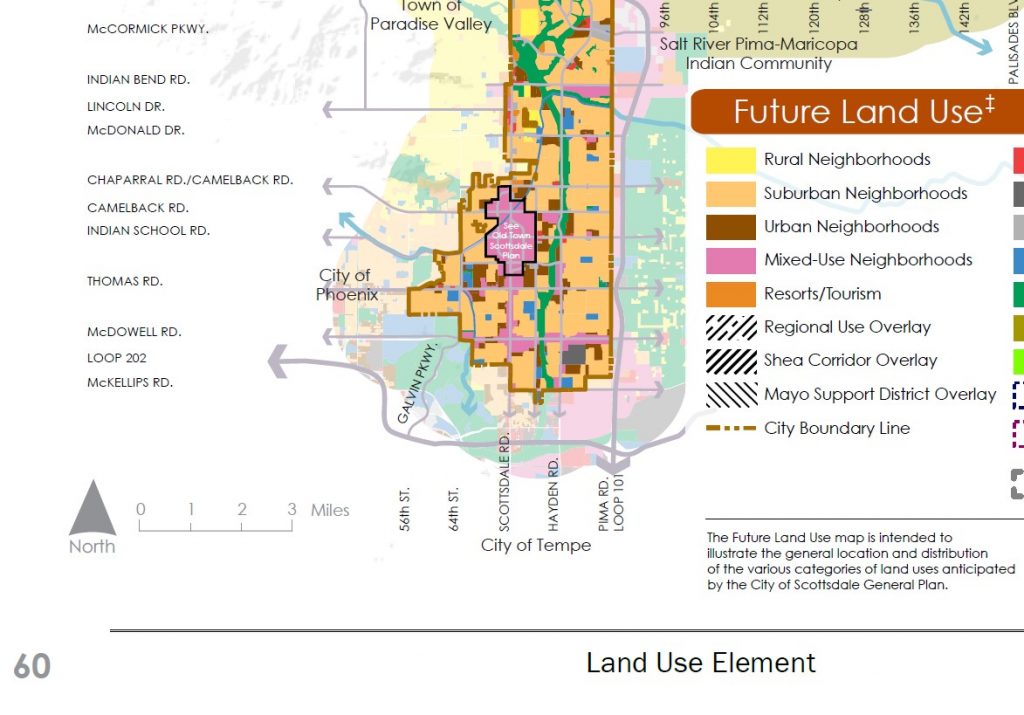 and it says explicitly,

Future Land Use. The Future Land Use map is intended to illustrate the general location and distribution of the various categories of land uses anticipated by the City of Scottsdale General Plan.

I’ll allow that there may be some semantic differences here, and that maybe in her haste Solange made an error in her reference. But… there’s a fundamental disconnect between, “will not affect land uses,” and, “land uses anticipated.”

The current City Council is resident-focused and unlikely to pass proposals that haven’t earned substantial public support among other criteria.

If the council really was “resident-focused” then why is the 2035 General Plan headed toward failure at the polls?

And show me one high-density housing project (of dozens the Council has passed in the past few years) that has had “substantial public support.” Most have had substantial opposition!

This is Solange’s version of, “I’m from the government, and I’m here to help you,” or more simply, “Trust me.”

I continue to receive questions from constituents regarding the Character Area Maps shown below.

Primarily, will the character area map changes urbanize Scottsdale? The short answer is ABSOLUTELY NOT.  Additional Q&A below.

Does the urban character designation impact future land uses or zoning?  NO

Does General Plan 2035 make any changes that impact zoning or future development?  YES. General Plan 2035 requires 5-votes of the City Council to create a new growth area in combination with a land use change. Versus 4 votes today or if GP2035 fails.

Why did the character areas on the maps change to “urban”?
Writing the General Plan 2035 has been a 2-year effort that began with a citizens review committee (CRC). The CRC felt it important to recognize that locations in the City had changed a great deal from what they were in 2001 and certain locations operate more as an urban area with a mix of uses.  The map has no bearing on future zoning decisions and can be removed from the Plan.

Why did City Council not remove the “urban” character during its review?  The City Council held 6-months of public meetings to finalize General Plan 2035. Not a single member on the City Council raised an issue about the urban character designation change during the 2-year process.  Had the issue been raised and discussed, it would have been resolved immediately at no cost to the taxpayers.

Are There Consequences if Prop 463, General Plan 2035 Fails?  YES.  Scottsdale is required to update the General Plan and the process will start again at a cost to taxpayers. The next iteration may have fewer resident priorities such as higher standards for development.

Will passing Prop 463, GP 2035 impact upcoming apartments approvals? NO. All zoning decisions are made by the City Council. The current City Council is resident-focused and unlikely to pass proposals that haven’t earned substantial public support among other criteria.